Indonesia’s manufacturing activity improved in April 2018, touching its fastest growth pace in 22 months, on the back of strengthening domestic demand. The Nikkei Indonesia Manufacturing Purchasing Managers’ Index (PMI) rose to a reading of 51.6 in April 2018, up from 50.7 in the preceding month (a reading above 50.0 indicates expansion in manufacturing activity, while a reading below 50.0 indicates contraction). However, business confidence towards the business outlook (for the year ahead) weakened to the lowest point since December 2012.

Production in Indonesia’s manufacturing sector recorded growth for the third straight month in April. Moreover, output growth accelerated at the sharpest pace since July 2014. According to the panelists, stronger demand conditions supported the latest growth. But while domestic demand supported the rise in production, new orders from abroad fell for the fifth consecutive month in April. Problematically, the rate of contraction quickened the fastest in just over a year.

In line with rising new orders (from the domestic market that is) and rising production, Indonesian manufacturers’ purchasing activity (input buying) rose last month, with the rate of growth accelerating to the fastest since July 2014. As a result, pre-production inventories grew slightly in April. Panelists also said backlogs of work declined for the 47th consecutive month in April as there were sufficient resources to complete work in time.

In contrast to the trend we saw over the previous two months – and despite reports of improving domestic demand conditions – staffing levels stagnated at the start of Q2-2018.

Meanwhile, input cost inflation eased from March’s 29-month high. However, it still remained sharp overall. Key reason behind higher input costs is the strength of the US dollar against the Indonesian rupiah. The rupiah depreciated to a level not far from the IDR 14,000 per US dollar level. Higher costs led to a further rise in factory gate charges. That said, the rate of inflation was slight and the weakest for six months.

And despite rising domestic orders, rising output and the improving economic climate, Indonesian manufacturers became less optimistic about the year ahead, with the level of positive sentiment touching the weakest position for 64 months and falling below the historical average.

Aashna Dodhia, economist at IHS Markit, said “the latest PMI data indicate that stronger demand conditions helped to shift Indonesia’s manufacturing sector onto a higher growth trajectory in April, with output and new orders rising at the fastest rates since July 2014 and June 2016, respectively. However, demand in international markets remained relatively subdued, with new orders from overseas falling at the fastest pace in just over a year”.

He added that “price data suggests that inflationary pressures, which stem from US dollar strength, subsided slightly as input cost inflation softened from one month earlier and now settled below the historical average”.

“Looking ahead, there was a note of caution, as business confidence moderated to the lowest level seen since the end of 2012. The dip in optimism partly reflected concerns of a potential market slowdown in the year ahead. At the same time, IHS Markit anticipates that widening interest rate differentials will lead to a further depreciation of the Indonesian rupiah this year”, Dodhia said. 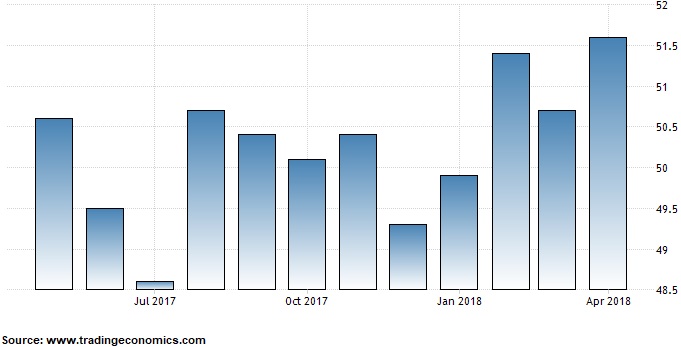